A combined history of over 300 years of tradition and change 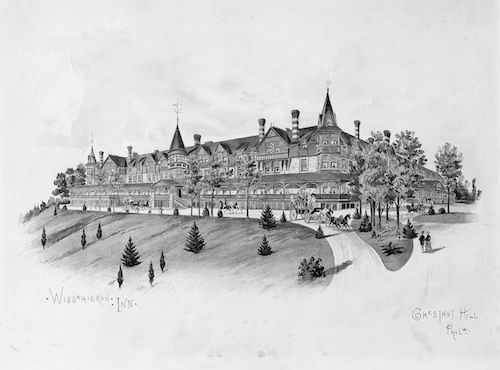 Presbyterian minister Roger Owen and his brother Joshua founded Chestnut Hill Academy in 1851. Another school with the same name was chartered in 1861 and for the next 34 years that school’s history is the source of some mystery. In 1895, CHA was rechartered and set on the course that would lead it through the next 115 years.
Meanwhile, in 1879, a girls’ school, Mrs. Comegy’s and Miss Bell’s French and English Boarding and Day School for Young Ladies and Little Girls, opened nearby. Mrs. Comegy’s and Miss Bell’s school became Springside School in 1899 when they retired. The school was renamed, quite literally, for the attractive natural spring located on its property at Norwood and Chestnut Hill Avenues in Chestnut Hill.
In 1898, Chestnut Hill Academy, under the leadership of Headmaster James Patterson, moved into the Wissahickon Inn. The Inn, built in 1884, was the architectural gem built by Henry Howard Houston, a wealthy industrialist with a vision to provide “a spectacular home away from home for those who could afford the respite from urban life, and the relaxation and recreation that came with it.”
In the early 20th century, the schools had growing enrollments of both day and boarding students and high academic standards. Springside, however, was in reality a finishing school, emphasizing character, morality, and manners above all else.
With the outbreak of World War I, the two schools experienced great change. In 1921, Springside eliminated its boarding department and CHA followed suit in 1934. As World War II began and able-bodied men were enlisted to serve, CHA closed its Senior School. It took 14 years and Headmaster Robert Kingsley’s untiring post-war efforts for CHA to rebuild its nine-grade school and reestablish its Upper School. The Class of 1956 was the first to graduate since 1942.
At the same time, Springside, adjusting to changing roles of women, increased its emphasis on academics as more of its students opted to go to college.
In 1954, the schools joined forces for an historic capital campaign, the bulk of which was raised to build a new facility for Springside on a parcel of land located on the corner of Willow Grove Avenue and Cherokee Street. Dr. and Mrs. Henry P. Brown Jr. gave 26 acres of the Houston estate, known as Druim Moir, for the construction of the school on whose footprint the academic buildings on the Cherokee Campus now sit.
Once located adjacent to each other, the schools could extend beyond a tradition of shared performing arts. The first classes with boys and girls were held in 1966. Thus began a 45-year partnership known as the “coordinate program” in which Upper School students enjoyed joint academic experiences in art and music classes, and fully coed classes starting in 11th grade.
The two schools flourished academically with a spirit of partnership into the first decade of the 21st century. In 2010, the two Boards of Trustees began conversations to evolve this partnership by collapsing the governing body into one board, along with various administrative functions. This board amalgamation was soon followed by a movement to unify faculty departments with one department chair and an intentional examination of curriculum across the divisions.
In 2011, the merger was official and CHA and Springside became Springside Chestnut Hill Academy. While the name was changed to underscore a statement of unity and purpose, the educational model remained the same. SCH Academy proudly boasts “the best of both worlds” with a single-sex education for Lower and Middle Schools and a fully coed Upper School.
SCH is now a recognized leader in independent schools and espouses a bold educational vision that prepares students for future success with a nod to the rich traditions and history from which the school was born.